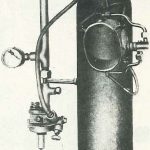 In 1916, Japan, Riichi Watanabi and the blacksmith Kinzo Ohgushi invented the first scuba, the “Ohgushi’s Peerless Respirator. It could be used as a surfaced supplied unit or from steel cylinders filled with compressed air.

The mask covered the eyes and the nose much like the one of the Ama. The first demand valve scuba was operated by the diver mouth. 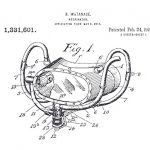 The diver had to bite the valve mechanism and the force controlled the flow. In 1919 the British patenting office and in 1920 its counterpart in the US, patented the Ohgushi Respirator.